In no specific order: 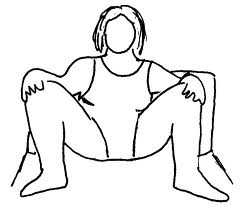 My cervix dilated to 3 centimeters and then productive labor went on hold.  And, to boot (hmmm, Freudian slip, I think), Jennifer was not properly positioned in the birth canal for a normal delivery.  This new development rattled Bob and he left the labor room (as typically depicted in stories and on sitcoms), and went to a bar and ordered a drink to calm himself down.  Meanwhile, I agreed to do some exercises to reposition the baby,  amidst doctors and nurses standing outside a curtained window that opened up for everyone’s easy viewing of my exercise session.  As if the pain of labor wasn’t enough!

5.  Our second child, Jeff,  at 10 years old attended Barnaby Woods Summer Camp. To finish out the summer camp, parents were invited to attend a closing program where they got to see their children perform in skits and receive awards for areas where they excelled.  All summer long, Jeff had talked about Danielle, a girl he apparently had a crush on.  As the day drew near, Jeff asked if we could pick up Danielle and her mother because they needed a ride.  When we picked them up Jeff began quizzically staring at Danielle’s mother and back again at Danielle.  Danielle’s mom was not unfamiliar with these kinds of stares.  You see, this was the first moment that Jeff realized that Danielle was of a different race than he was.  And then, Jeff’s younger sister, age 5, asked me:  “Mommy, why is Danielle’s mother a different color?”  It was an uncomfortable few moments at first, but we mothers just exchanged glances and grinned through it.