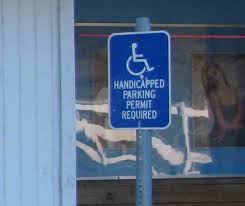 As Bob made a very long and wide turn from the drive with our Ford F-150 truck to park it in a handicapped space another car came from the opposite side of the drive and pulled straight into the space next to us.

We were both laughing about our similar aches and limps as we very gingerly exited our truck to approach the sidewalk to the movie theatre entrance.

I next noticed a very fashionably dressed, color coordinated, grey-haired lady in front of me who had gotten out of the car that parked beside us.  She was favoring her left leg similar to me with my current gait. So, when I got close enough, I tapped her on her right shoulder and asked, “Hey, wanna race?”  Much to my delight and surprise, she responded with, “I’m sure it wouldn’t be much of a race for you because you’re much younger than me. You see, I’m 93.”

Bob and I instantly froze in our tracks and stared–probably with our eyes bulging, our mouths wide open, and our jaws very near the ground.  Before us stood a beautiful 93-year-old who donned a full head of impeccably styled grey hair.  She was wearing powder blue slacks, powder blue flats, and carrying a powder blue purse.  Her outfit matched her beautiful powder blue eyes.  I’m quite sure as a younger woman she must have had a peaches and cream complexion because in the bright sunlight of the afternoon her face was absolutely wrinkle free with no noticeable age spots or lines.  We both congratulated her on her youthful appearance and we all then proceeded to the ticket counter.    And, wouldn’t you know it, we all bought tickets to see Lee Daniels, The Butler.

The Butler movie is loosely based on the real life of an African American sharecropper’s son who was born in Georgia in 1919–just one year earlier than my beautiful acquaintance from the parking lot just outside.  He goes to Washington in the 1950’s and eventually serves eight U.S. presidents as a White House butler–from Eisenhower to Reagan.  Forrest Whitaker was great as the fictional character named “Cecil Gaines”. The cultural, political, societal and emotional peaks and valleys all came rushing back to me. In the closing scenes, President Obama has invited then retired butler Gaines back to the White House to honor him and his 34 years of service.

After the movie, we met up again with our newly found friend from the parking lot.  We immediately started exchanging comments about the movie.  And we agreed that the movie was very good; that it caused old feelings and emotional memories to rush back in on us.  And, she expressed to me how wrong the days of slavery and segregation were and how unfortunately racism seems to still be alive and there’s more to be done to improve our American culture and society.

It’s rare when we cross paths of strangers, never exchange names or other personal information, yet instantly become connected as though we had been longtime friends.  I’ll always cherish those moments with this kind and gentle young woman of 93.  Oh yes, and while in line for refreshments, I did ask her to what she owed her health and longevity.  She politely smiled and said to me’ ” I guess my genes, but I don’t want to live to be 100″.  We parted by wishing each other well and went off on our separate ways.