We had a girls’ day out on Saturday, August 11–my granddaughter, daughter and me (+1 grandson), to celebrate my millennial grand daughter’s 14th birthday.  While having lunch, I asked them to name a film or films that they had watched three times or more.  Naturally, the Wizard of Oz and its amazing technicolor, graphics, and special effects of 75 years ago was the major topic of discussion. Our conversation then flowed naturally into just how many times we actually had viewed it.

My daughter and I remembered our niece/cousin, Jessica, who as a toddler visiting my parents, her grandparents, on Sundays always asked to watch “the rainbow movie, granddaddy.”  And, despite being in direct competition with Sunday Night Football, granddaddy and the whole family acquiesced.  In fact, this became one of the many family traditions of getting together on Sundays at the parents’/grandparents’ home.

Dad would pull the VHS tape from the shelf–the only tape there that had not collected any dust–and he would get down on all four’s on the carpet to load the tape into the tape player.  And every time he did this, we used to laugh at him struggling to get everything perfectly loaded before starting the show.  So in addition to the seasonally broadcast versions on TV, we want to say that each member of our family in their twenties or older has probably seen The Wizard of Oz over 100 times each!

Below, is what the Newspapers™.com ripped from historical headlines to celebrate this spectacular movie that now is 3/4’s of a century old!

The Wizard of Oz Turns 75 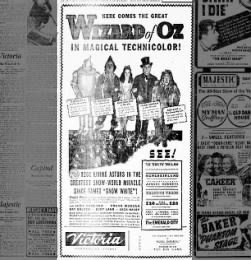 August 12 marks the 75th anniversary of the premiere of one of America’s most iconic and beloved films: The Wizard of Oz. Premiering in Oconomowoc, Wisconsin, on August 12, 1939, The Wizard of Oz screened in Hollywood on the 15th and New York on the 17th, before it’s general release on the 25th. Newspaper film critics immediately loved it, calling it “a glittering, rollicking fantasy in the modern idiom” and “this season’s rainbow lollipop of entertainment” that you’d “have to be pretty old and crotchety not to like.” The critics were awed by seemingly every aspect of the film, from the vibrant Technicolor, intricate costumes, and imaginative sets, to the clever songs, talented actors, and mysterious “camera magic.” One review summed it up by calling the film “the most ideal combination of color, music, dancing, spectacle, pageantry, laughs, and thrills.” More than one article mentioned the movie’s $3 million price tag, with one reviewer observing that 13 “ordinary pictures” could’ve been made for the same price. 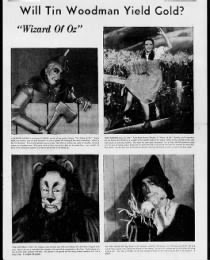 Critics almost unanimously declared The Wizard of Oz to be a perfect “all-family picture” that “successfully combin[ed] for the first time adult and juvenile appeal.” (Though at least one reviewer cautioned that parents view the film first if their young children were “subject to nightmares.”) And the film certainly did have “juvenile appeal.” Youth groups commonly held “theater parties” to attend the film together, and some children even hosted “Wizard of Oz” parties complete with yellow-brick roads and family members in character costumes. Contests to win a chance to meet the cast members were also popular for youth, especially the one hosted by Loew’s theaters in New York.

Theaters promoted the film other ways too, holding special screenings where audience members were given autographed cast portraits, novelty buttons, and ice cream, for example. Other businesses got in on the action by using the film to promote their merchandise—everything from fur coats and dresses to ice cream. Despite the positive reviews, the film wasn’t originally a monetary success because its high production costs countered box-office earnings. However, a re-release to theaters in 1949 and annual television broadcasts beginning in 1956 introduced The Wizard of Oz to new generations of children, transforming it into the beloved classic it is today.