A recent blog post focused on my maternal great-grandmother Mary Susan MORRIS‘s family–our Native American heritage through the Morris branch–and the freshly fallen bricks of a wall I had been up against for years.

Not abandoning this wall, but continuing on, I returned to my maternal great-grandfather–Grandmother Susan’s husband, John Carpenter Ford’s (1864-1961) family. Similarly, I found myself at yet another brick wall at his paternal grandfather, Henry Ford (1790-1830)–not the infamous innovator of the automobile industry.

Henry Ford’s birth and death have been recorded as North Carolina in many public family trees.  These trees also show that he and Peggy Rigsby had a son, Robert Jackson Ford, father of my great-grandfather, John Carpenter Ford. Henry’s marriage to Peggy is documented in the North Carolina Marriage Index (1741-2004) as 5 Aug 1816 in Raleigh, Wake County, North Carolina.  Without any evidence to the contrary, we suffice that this Henry is my third great-grandfather, who we also believe was of Scottish/Irish descent based upon the etymology of the surname Foard, Foord, and Ford as it became commonly spelled.

The term “Scotch-Irish” is an Americanism, generally unknown in Scotland and Ireland, and rarely used by European historians. In American usage, it refers to people of Scottish descent who, having lived for a time in the north of Ireland, migrated in considerable numbers to the American colonies in the eighteenth century. 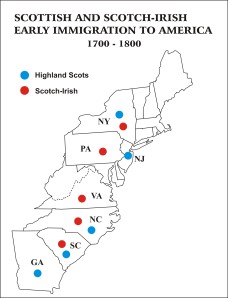 The Scotch-Irish or Ulster Scots had prospered in Ireland until changes in English policies led many to migrate to America, where most settled in Pennsylvania. They began to arrive in North Carolina in the 1730s, leaving Pennsylvania after crops were harvested in the fall and arriving in Piedmont in time to plant winter crops and seedlings that they brought with them.

On small farms, these Scotch-Irish settlers grew corn for home use and wheat and tobacco for use and for export. They raised livestock and drove them in large numbers to northern markets. Settlers built stores, grist mills, sawmills, and tanneries. Blacksmiths, carpenters, coopers, potters, rope makers, wagon makers, and wheelwrights established many local industries. Brewers, distillers, weavers, hatters, tailors, and others practiced their trades either in isolated homes or in shops in towns.

“The Guttenberg Project:  Scotland’s Mark on America,” published in 1921

In 1682, a number of Scottish nobility and aristocracy first left Scotland and settled in New Jersey and the Carolinas. During the following century, a constant stream of emigrants both from Scotland and from Ulster, Ireland came to the colony.  The largest influx of Scots/Scots-Irish into North Carolina was in the form of Protestants–largely Presbyterian but also Anglican due to religious persecution. 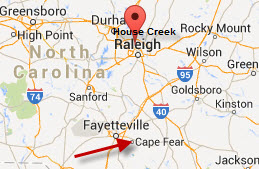 The red arrow points to Cape Fear. The red pin points to House Creek in Raleigh where my Ford ancestors lived.

From 1715-1773 tens of thousands of Scots settled in North Carolina on or near the Cape Fear River. Cross Creek, now Fayetteville, was the center of these settlements. It was in this area of North Carolina that my Ford family’s history is first documented.  In fact, my 2nd great grandfather lived and died in the House Creek area of Raleigh, Wake County, and still today there are thousands of Fords who still live in North Carolina.

Gov. Gabriel Johnston, of the province of North Carolina from 1734 to 1752, appears to have done more to encourage the settlement of Scots in the colony than all its other colonial governors combined.

Between 1729 and 1740 scots were in Virginia. A strong infusion of Scottish blood in New York State came through settlements made there in response to a proclamation issued in 1735 by the Governor, inviting “loyal protestant Highlanders” to settle the lands between the Hudson River and the northern lakes.

The first Presbyterian Church was organized in Albany, New York, in 1760 by Scottish immigrants who had settled in that vicinity.

In 1773 Scots penetrated to and settled in Kentucky.  By 1790 seventy-five thousand people were in the region and Kentucky was admitted to the Federal Union in 1792.

According to the United States Historical Census Data Base (2002), the ethnic populations in the American Colonies of 1775 were:

By 1779 they had crossed the Ohio River into the present state of Ohio. Between the years 1730 and 1775, the Scottish immigration into Pennsylvania often reached ten thousand a year. 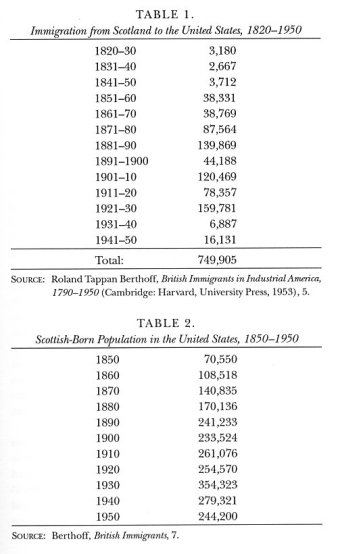 In 2000, the state of North Carolina had more citizens of Scottish ancestry than any other state or country.

And, like so many other of my posts that I have written while journeying through stories and searching for historical records these data provide me with new and improved evidence about the life and times of my family’s ancestors, I must end today’s post here–with many questions still unanswered…until next time.

One thought on “Native Americans, White People, and Scottish-Irish Emigrate to North Carolina”