Many of the men in our family in their younger days were beer drinkers.  Today, not so much.  In fact, at our family gatherings for the past 30 years we have had only non-alcoholic beverages.

The Beginning of My Family’s Beer Drinking Days

My dad was an attractive but scrawny child, who in 1949, three years after marrying my mom at age 18, asked his doctor what he could do to gain weight.  Dr. Brainin, our family doctor, suggested that he drink one beer a day with his dinner each night.  And, that began his beer drinking days that lasted until 1985 when he suffered his first stroke at age 57–30 years after his first drink and 125 years after the Busch family came from Germany to settle in St. Louis, Missouri and to sell beer.

Budweiser’s story began in ­­1857 when a young man, Adolphus Busch, with his meager inheritance —he was one of 22 children—bought a brewery supply company.
In the mid-1800s, most Americans preferred robust, dark ales. And Busch, after traveling Europe to observe and study the latest brewing techniques, became the first person in the United States to pasteurize beer and to make a lighter and tastier ale. His pasteurization also allowed the ale to remain fresh during cross-country trips. He owned the company that built the railroad cars that transported his beer; owned the company that made his bottles; and, even owned a coal mine that fired his plant.

Ebert Anheuser, on the other hand, owned a failing brewery. He was one of Busch’s buyers and was a wealthy soap manufacturer. His Bavarian Brewing Company produced such horribly tasting beer that “people would spit it back across the bar at bartenders,” so says National Public Radio’s investigative reporter, William Knoedelseder.

Anheuser-Busch introduced this light bohemian lager in 1876 under the brand name Budweiser. Beer became the national drink, and Anheuser-Busch was reeling in the profits, “They were selling a million barrels a year, which was just unthinkable back then,” says Knoedelseder.

And, just over 50 years after coming to America, about 10 years before prohibition laws (1919-1933) in the United States,  we can see below an example of Budweiser’s novel marketing in newspapers around the country where they claimed Budweiser was the end-all, be-all, and the King of All Beers. 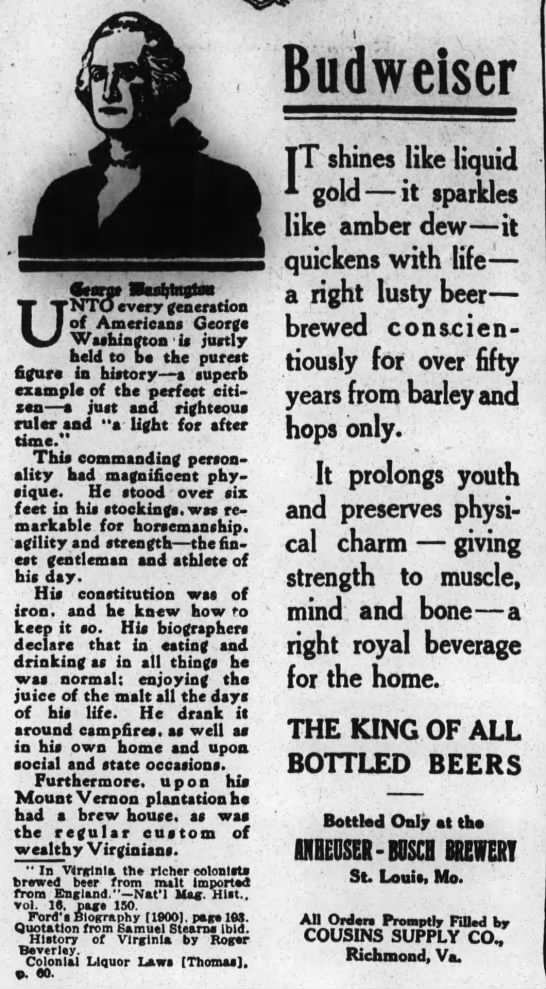 And, in the 1980’s, 72 years after “The King of All Bottled Beers,” appeared in the Daily Industrial News on 20 August 1908, Budweiser changed its beer title to “King of Beers,” and that title stands today.

In 2008, after four generations of the Busch family owning the company, it was purchased through a hostile takeover by a recently new company in the industry, InBev, and  the reign of the Busch family was over.  Yet, its appealing targeted marketing still makes its brand one of the highest selling beers in the United States, and available in over 80 markets worldwide.  In fact, many fans of football’s Super Bowl tune in just to see the highly expensive, highly creative, commercials–always among the top:  Budweiser’s “King of Beers.”     Budweiser produced the following tribute commercial after 9/11. They only aired it once so as not to benefit financially from it – they just wanted to acknowledge the tragic event …