My Short Time in the Newspaper Business

My second job out of high school was working in the classified advertising department of the Washington Star Newspaper (1852-1981).  Until its demise in 1981, The Star was universally regarded as the “paper of record” for the nation’s capital. Published under such titles as Washington Star-News and The Washington Star, this long-running daily afternoon paper was one of the highest profile publications in the nation. Founded in 1852, by the 1930s its coverage of national politics–including the daily activities of every branch of government–made it the nation’s number one paper in advertising revenue.

A Boldly Autonomous Voice in the Nation’s Capital 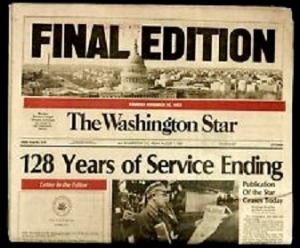 1From its earliest years, The Star was unafraid to buck Washington’s prevailing political winds. Prior to the Civil War, as abolitionists decried slavery in their own publications, The Star presented both sides of the debate. During the War itself, the Star’s excellent reporting increased its popularity; even today Civil War historians frequently cite Star articles at length. By the mid-20th century—a period marked by McCarthyism, landmark Civil Rights legislation and the beginning of the space race—the Star reached its zenith in local circulation and national influence. Between 1944 and 1981, Star writers, reporters and cartoonists accumulated 10 Pulitzer Prizes.  Fortunately, the Evening Star from its founding on December 15, 1852, to the day it ceased publishing on August 7, 1981, is available as a digital and searchable facsimile that chronicles nearly 130 years of American history from the Antebellum Period, to World War I, and the Post-Vietnam Era. 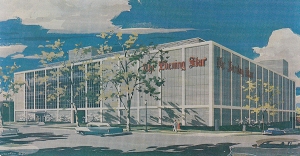 And there I was, one of about 30 women in desks that were lined up one after in a sea of rows from the front of the room to the back of the room. I answered incoming calls as a telephone ad clerk all day, every day.  We wore ugly, cumbersome telephone headsets all day, every day, and these headsets obviously destroyed any big, fluffy, bouffant or “Afro”/”natural” hairstyles of the era. A conveyor belt next to our desks passed the ads we received to a supervisor’s station.   Initially, I answered random incoming calls from callers requesting ad placements to help them sell: cars or other vehicles, merchandise, or pets, personals, or individual real estate sales and rentals, and even garage sales/moving events.  With often supervisor’s listening in on our conversations, we talked with individuals to define their desired wording, calculated their ad charges, issued box numbers for anonymous ads, and assigned dates for their ads publication. Within three months, I found myself promoted to a “Real Estate Advertising Specialist,” with my own real estate company accounts.  My job was to keep Virginia’s real estate newspaper advertising flourishing.  But, I quickly decided that the rows of desks, the heavy and disfiguring headphones, talking on the phone all day long with the public, and the overall monotonous routine of the job was not for me.

The best news about my job at The Star: my desk was stationed across this vast warehouse-like room from some of the world’s renowned reporters and writers. Yes, I worked in the same building as Carl Bernstein, the investigative journalist best known for his work with Bob Woodward in uncovering the infamous Watergate scandal (1972-1974).  And, to some extent, I need to acknowledge that I developed my first editorial and wordsmithing writing skills from my brief experience at The Star.

During Reagan’s 1981-1982 recession, The Star was among some of the first newspapers in the country to fold.  Thirty-some years later, from today’s, September 11, 2015, VANCOUVER (NEWS 1130):  Ken Goldstein, Communication Management, Inc. said as three more Canadian newspapers are closing their doors over the next few weeks:

“If you still like to sit down and read a newspaper with your morning coffee, beware: those days of daily newspapers could be numbered….”

The Worst News…The Slow Death of the Great American Newsroom

By Tim Adams, Staff Writer for The Guardian/Observer, on March 21, 2015, describes the slow death of the great American newsroom this way:  In the past decade, as a percentage, more print journalists have lost their jobs than workers in any other significant American industry. (That bad news is felt just as keenly in Britain where a third of editorial jobs in newspapers have been lost since 2001.) The worst of the cuts, on both sides of the Atlantic, have fallen on larger local daily papers at what Americans call metro titles. A dozen historic papers have disappeared entirely in the US since 2007, and many more are ghost versions of what they used to be, weekly rather than daily, freesheets rather than broadsheets, without the resources required to hold city halls to account or give citizens a trusted vantage on their community and the world.

The reasons for this decline are familiar – the abrupt shift from print to pixels, the exponential rise in alternative sources of information, changes in lifestyle and reading habits, and, above all, the disastrous collapse of the city paper’s lifeblood – classified advertising – with the emergence of websites such as Craigslist and Gumtree. The implications are less often noted.

Stephan Salisbury, a prize-winning culture writer at the Philadelphia Inquirer for the past 36 years, puts them like this:

“Newspapers stitch people together, weaving community with threads of information, and literally standing physically on the street, reminding people where they are and what they need to know. What happens to a community when community no longer matters and when information is simply an opportunity for niche marketing and branding in virtual space? Who covers the mayor? City council? Executive agencies? Courts?… It is this unraveling of our civic fabric that is the most grievous result of the decline of our newspapers. And it is the ordinary people struggling in the city who have lost the most, knowing less and less about where they are – even as the amount of information bombarding them grows daily at an astounding rate.”

The Internet is Killing Newspapers and Giving Birth to New Sorts of News Access!

“…newspaper companies’ tribulations do not necessarily presage the demise of the news business, for they stem in part from the tumultuous and expensive transition from paper to electronic distribution. News organisations are currently bearing two sets of costs—those of printing and distributing their product for the old world, and providing digital versions for the new—even though they have yet to find a business model that works online.”

“…the only certainty about the future of news is that it will be different from the past. It will no longer be dominated by a few big titles whose front pages determine the story of the day. Public opinion will, rather, be shaped by thousands of different voices, with as many different focuses and points of view. As a result, people will have less in common to chat about around the water-cooler. Those who are not interested in political or economic news will be less likely to come across it; but those who are will be better equipped to hold their rulers to account. Which is, after all, what society needs news for.”

Like many other readers, my average day is usually hectic.  I like to optimize my time set aside for reading.   I no longer desire to wrestle with a bulky newspaper, get newspaper ink all over my hands and reading surfaces, and I actively use social media apps to receive and share information that interests me. As with other media that I used to use for information and entertainment, newspapers in print is one of those things, unfortunately, that I prefer to access through various other digital media and devices.  On the other hand, however, I am extremely grateful for the newspapers of the past and the history that is shared with us today from the digitized archives of them.