The picture below is just one of several taken at our home in Capitol Heights, Maryland.  It was a New Year’s Eve Party  hosted by my parents Frank and Norma Boling on Thursday, December 31, 1953. (And, in less than a week, I would turn 7 years old.)

America is in its Post World War II boom.  Note the homemade decorations of crepe and construction paper.  Dad with the help from his father, Jesse Boling (1902-1978), and his uncle Richard T. “Dick” Boling (1915-1982) finished off the rec room in a house that was built by my grandfathers and uncles in 1948.

Let’s go back–back to those days:  the average cost of new house was $9,550; average wages per year $4,000;  a gallon of gas cost 20 cents; a new car $1,650; a Kodak Brownie Flash Six –$13; women’s shoes were about $3.50 and dresses about $5. A teacher’s average salary was $4,254 (above average wage per year scale), and a pound of round steak was 90 cents. The first color television sets appear selling for $1,175–about the cost of a large flat screen HDTV today; and, transistor radios start to appear for sale from Texas Instruments. And, on those TV’s, we were watching The Lone Ranger, Adventures of Rin Tin Tin and Dragnet–nothing too objectionable there!

Oh, I can easily explain that…

But wait–let’s take a look at the wall to Tommy Waring’s back, behind the bar in that picture below.  Note the free store calendar with the large picture of the nude pin up vs. the small calendar sheet (curled up).

I confronted dad about this picture just today and he said glibly, “Oh, I can easily explain that…”  And, I raised my right eyebrow to give him a look of “are you sure about this, because I’m not so sure you can.”  He quickly retaliated my look and said, “That was all your uncle Dick’s doing.” (My Great Uncle Dick, who I remember as seldom being sober.)  “I told him when he was sawing (to cut in the bathroom plumbing on the other side of that wall) that he was going to cut in too deep. And, once again, sure enough I was right!”  So, I said; “You had a carpenter, a plumber, and yourself handy, and the only way the three of you knew to fix your error was to cover the big hole with a pinup girl?”  Dad quickly snapped back; “But that’s just not ANY pinup girl–that’s Betty Grable, the #1 pin up girl of World War II!” 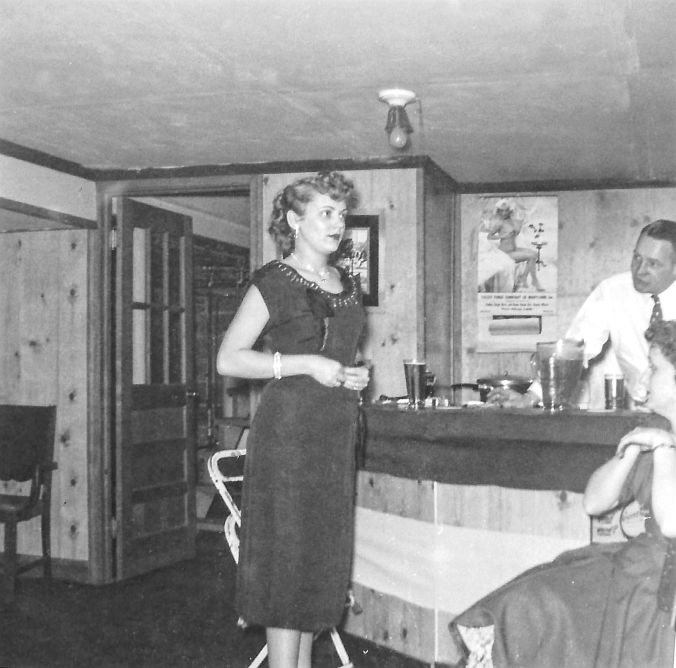 OMG! Don’t look at the Calendar on the Wall…

Now, I was familiar with Betty Grable’s fame.  I even knew that she had insured her  “most beautiful legs in Hollywood” for a mere 1 million dollars!  But, I thought she only did bathing suit shots that focused on her glamorous legs.  So, I went once again to the web and searched Betty Grable, pin up pictures, pin up calendars, and could find not a one of a nude Betty Grable.  But Betty Grable was more than a 1940’s pin up girl.  She was an American dancer, singer, and actress.

Yet, there I was–talking with an old man–my father–about some of his favorite memories.  It was there and then that I decided not to bring up Betty’s calendar again–at least, not to dispute his memory of Betty posing in the nude in his former rec room!  Even I have learned to let a man have his memories…