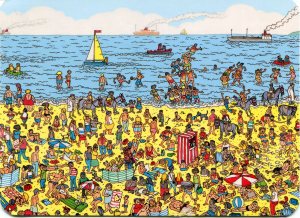 We are about 1,500 miles away from home in the Caribbean on the West Indies Island known as Hispaniola–the second largest island in the Caribbean within the Greater Antilles.  It occupies an area of 29,418 square miles. Haiti occupies the western third of the Hispaniola island and the remaining eastern two-thirds make up the Dominican Republic. During the Age of Discovery (15th-18th centuries), Christopher Columbus landed on Hispaniola on December 5, 1492, and named it La Isla Española, “The Spanish Island,” which was eventually Anglicized to Hispaniola. It is said that when he first laid eyes on its shores, he termed it “La Perle des Antilles” or “the Pearl of the Caribbean.”  Because of this widespread European discovery and exploration movement, New World and

Old World products were exchanged. This brought horses, cows, and sheep from Europe to the New World and tobacco, cotton, potatoes, and corn to the Old World.

We arrived here on Sunday, March 12, 2017, to celebrate our 52nd Wedding Anniversary (wedding date: March 27th).  On Monday, we met with travel advisors and oriented ourselves within the Dominican Republic’s Grand Palladium Punta Cana Resort & Spa Complex, where we stayed for five days.  The resort nestles within 79 acres of land surrounded by a coconut plantation with a variety of lush tropical vegetation. Its indigenous trees include mahogany, rosewood, satinwood, cypress, pine, oak, and cacao. All around us we see exquisite plants, bountiful tropical fruits, and spices including rice, tobacco, cotton, sugarcane, yam, banana, pineapple, mango, fig, grape, breadfruit. , oregano, paprika, and many more.

Obviously, we’re not Dominican, have not lived in a Dominican neighborhood or spent a lot of time exploring the island, so we were quite surprised when we were introduced to this drink known as “Mama Juana”. Similar to the 19th Century American practice of selling cure-all elixirs in traveling medicine shows, in the 1950’s, Jesus Rodriguez invented Mama Juana with claims that it was an herbal medicine that apart from acting as an aphrodisiac could rid you of the flu, aid digestion, and circulation, and cleanse the blood, liver and kidneys. It’s a concoction of rum, red wine and honey, soaked in tree bark and herbs. Some say this elixir tastes like Port or Amaro liqueur, but my taste buds reacted to it much like they do when I have to take obnoxious cough syrup.  However, Mama Juana’s claim to fame is its promised sexual potency, which has given it a nickname of “liquid Viagra”.

You may know the common riddle joke, “why did the chicken cross the road.”  Well, as we taxied through the resort, we needed to stop and give the right-of-way to a pair of magnificent peacocks with their massive tails and iridescent shades blue, grey, and green coloring. They wanted to cross the road to get to the other side to graze among the fruits, nuts, worms, and lizards.   As the story goes, and so befitting to our anniversary celebration this week, Peacocks are pure of heart.  They pair with a mate and are loyal and eternally faithful to their partners–I accepted this encounter as a good omen of things to come.

The most noteworthy mammal among the indigenous animals is the agouti, a rodent. Wild dogs, hogs, and Brahman cattle are abundant, as are many reptiles, notably snakes, lizards, and caimans. Waterfowl and pigeons are common birds.

But, What Has Any of This To Do With John Rolfe? 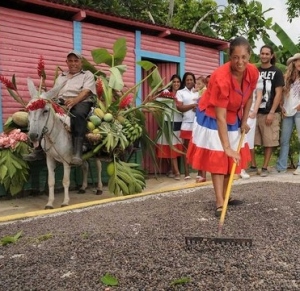 Maria, landowner, and some of her family in the background.

Quite surprisingly, it does and we will get to it.  But first, we explored the diverse Dominican countryside in an open-air safari-style truck during our guided tour excursion from Punta Cana where we ventured into the Anamuya Mountains.  There, we spent time on horseback, explored an old sugar plantation, tasted several fruits and vegetables, sucked on raw sugar cane, shelled coffee from its beans, drank freshly ground cocoa and fruit drinks, savored a typical buffet lunch, visited with a Dominican family, and relaxed on the white sands of Macao Beach.

And here’s where my 10th great grandfather, John Thomas Rolfe comes into this picture and became a part of our discussion within the cultural excursion in the Dominican Republic.  In 1612, just three years after John Rolfe, husband of Indian Princess Pocahontas arrived in Jamestown, Virginia–originally from Heacham, England–John Rolfe began the state’s tobacco industry from tobacco seeds that he got while on one of his trips to the West Indies. He exported the first shipment in 1614 and it became Virginia’s biggest cash crop.  When the new tobacco was sent to England, it proved immensely popular, helping to break the Spanish monopoly on tobacco and creating a stable economy for the new colony. By 1617, the colony was exporting 20,000 pounds of tobacco annually; that figure doubled the following year.

Tobacco became central to the state economy and to the new United States in the 1770s. It was glorified and celebrated with parades and tobacco queens. In tribute to the history of Virginia’s top cash crop, thousands of tiny tobacco leaves are carved into the ceiling of the State Capitol.

However, in the last 50 years, with the adverse medical findings, the world turned against smoking and against tobacco companies.  In 1998, the United States government reached a master settlement agreement with the big tobacco industry and has paid farmers not to grow tobacco since then.

You will learn more about the connection between John Rolfe, the Dominican Republic and earlier days of tobacco making from our demo here.  It features Alex, our safari tour guide, and a native Dominican who has been hand rolling cigars for 48 years.  In fact, we went on three excursions during our stay and all of our guides and drivers (Alex, Hamlet, Melo, and Francisco) referred to us as family and treated us as such.  Our trip was truly enriched by them and their good humor, humility, respect, and knowledge sharing about The Dominican Republic, it’s peoples and cultures.

There were two more excursion features that I am compelled to include before finishing up this post.  The ZipLine Excursion.  Ziplining has been on my bucket list and it was through my God, my faith, and my fortitude (that I believe my grandmother Loretta instilled in me) that helped me embrace the challenge of climbing stairs to the 12 various zipline platforms there were as high as nearly 2,300 feet and 800 meters long at times (for a total of about two miles of ziplining), and my desire at age 70 to push myself out of my comfort zone to set an example for our younger family members that they can succeed at anything they want if they set their hearts and minds to it.  I also wanted to thank God for each new day of my life here on earth with all my family and friends.

Likewise, I’d like to thank all the Punta Cana and excursions staff and especially the twenty+ young men who welcomed and pushed me off each of the 12 zip line platforms. I felt their kindnesses and cheers that helped me to succeed and complete the full course of nearly two miles and at heights as high as 2,296 feet over mountains, rivers, and forests.  I just knew at some point, though, along my journey I was going to take out at least one of them when coming into the finish line at each of the 12 platforms. Fortunately, for all of us we “hung in there,” for a successful completion and another great memory.