As my dad lies in Calvert  County Hospital’s ICU, where no visitors are allowed, I find a curious need to return to writing–not necessarily about our family’s history as I usually do, but rather, to focus on other larger world issues for a momentary diversion.  And this time, it’s about our impending 2020-2021 school year where school districts are not in sync with whether our children should attend school in person, attend school online, and/or devise new and improved distance learning techniques.

The following article written by reporter, Theresa Waldrop, was published today by CNN, an American news-based pay television channel owned by CNN Worldwide, a unit of the Warner Media News & Sports division of AT&T’s Warner Media. It was founded in 1980 by American media proprietor Ted Turner and Reese Schonfeld as a 24-hour cable news channel:

(CNN)This isn’t the first time leaders have struggled with deciding whether to keep schools open in a pandemic.

During the influenza pandemic in 1918, even though the world was a very different place, the discussion was just as heated.
That pandemic killed an estimated 5 million people worldwide, including 675,000 Americans, before it was all over.
While the vast majority of cities closed their schools, three opted to keep them open — New York, Chicago and New Haven, according to historians.
The decisions of health officials in those cities was based largely on the hypothesis of public health officials that students were safer and better off at school. It was, after all, the height of the Progressive Era, with its emphasis on hygiene in schools and more nurses for each student than is thinkable now.
New York had almost 1 million school children in 1918 and about 75% of them lived in tenements, in crowded, often unsanitary conditions, according to a 2010 article in Public Health Reports, the official journal of the US Surgeon General and the US Public Health Service. 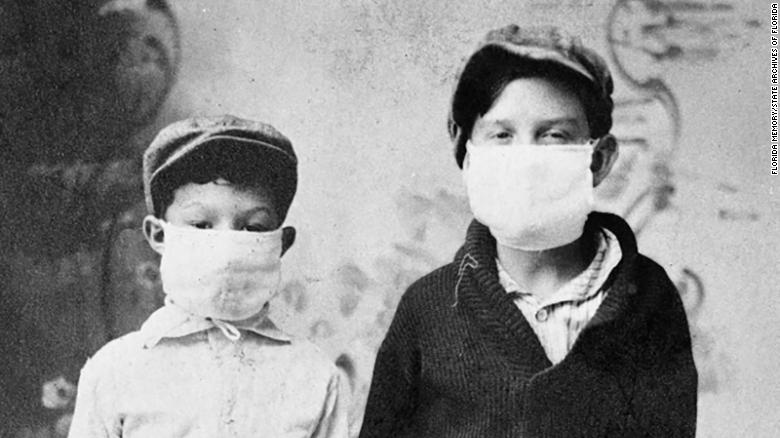 Don Hoover and Joe Sistrunk of Starke, Florida, are ready for school during the 1918 flu outbreak.

“For students from the tenement districts, school offered a clean, well-ventilated environment where teachers, nurses, and doctors already practiced — and documented — thorough, routine medical inspections,” according to the Public Health Reports article.
The city was one of the hardest and earliest hit by the flu, said Dr. Howard Markel, a medical historian and director of the Center for the History of Medicine at the University of Michigan. He was a co-author of the 2010 Public Health Reports article.
“(Children) leave their often unsanitary homes for large, clean, airy school buildings, where there is always a system of inspection and examination enforced,” New York’s health commissioner at the time, Dr. Royal S. Copeland, told the New York Times after the pandemic had peaked there.
Students weren’t allowed to gather outside school and had to report to their teacher immediately, according to Copeland. Teachers checked students for any signs of the flu, and students who had symptoms were isolated.
If students had a fever, someone from the health department would take them home, and the health official would judge whether the conditions were suitable for “isolation and care,” according to Public Health Reports. If not, they were sent to a hospital. 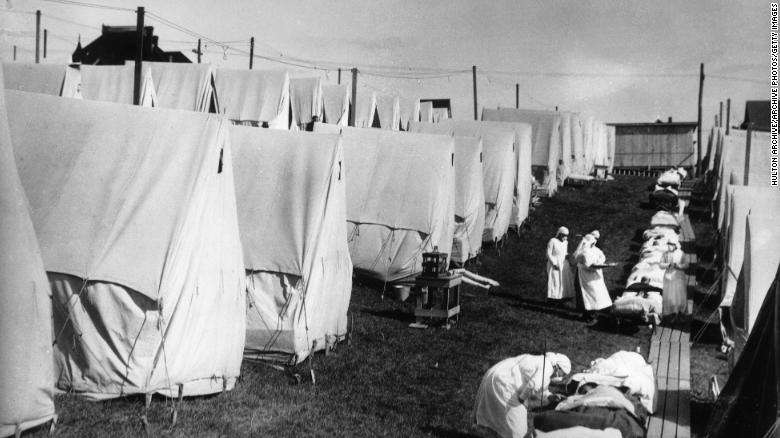 Influenza patients in Lawrence, Massachusetts, in 1918.

“The health department required families of the children recovering at home to either have a family physician or use the services of a public health doctor at no charge,” the Public Health Report article said.
The argument in Chicago for leaving schools open for its 500,000 students was the same: keeping schools open would keep the children off the streets and away from infected adults, the reasoning went.
If social distancing was helpful then, it would have been made easier by the fact that absenteeism in schools soared during the pandemic, perhaps because of what one Chicago public health official called “fluphobia” among parents.
“The absentee rate was so great, it really didn’t matter” that schools were open, Markel said.
Part of Chicago’s strategy was to ensure that fresh air was circulated. School rooms were overheated during the winter so that windows could remain open at all times, according to a 1918 paper by the Chicago Department of Health.
The paper concluded that an analysis of data showed that “the decision of keeping the schools of this city open during the recent influenza epidemic was justified.” 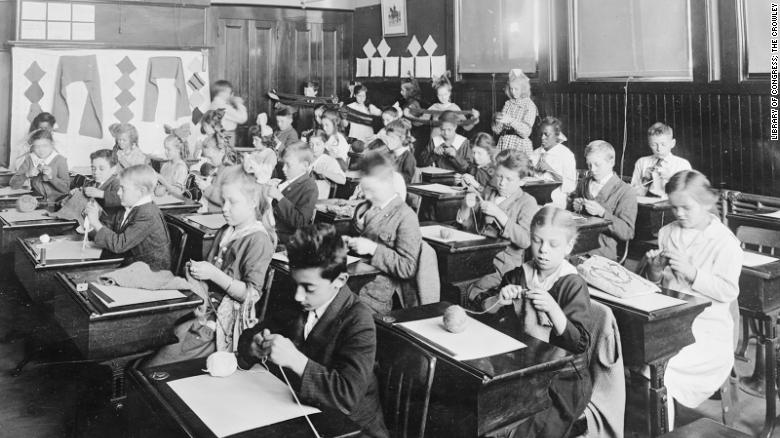 A fifth-grade class knitting for a Junior Red Cross project in Plainfield, New Jersey, in 1917 or 1918.

And in New York, then Health Commissioner Copeland told the New York Times: “How much better it has been to have the children under the constant observation of qualified persons than to close the schools.”
Markel, who with other researchers pored over data and historical records in looking at the response of 43 cities to the 1918 pandemic, isn’t as convinced.  New York “didn’t do the worst, but it didn’t do the best, either,” Markel said, adding Chicago was slightly better.
Research showed that cities who implemented quarantining and isolation, school closures and bans on public gatherings fared the best, he said.
“The cities that did more than one” of these measures “did better. School closures were part of that contribution,” Markel said.
Public health experts, including Markel, are quick to point out that Covid-19 is not influenza, which was a well-known disease in 1918. There is still a lot to learn about the novel coronavirus and the disease it causes, Covid-19.
The right decision today, Markel said, is school closure.
“It’s better,” he said, “to be safe than sorry.”